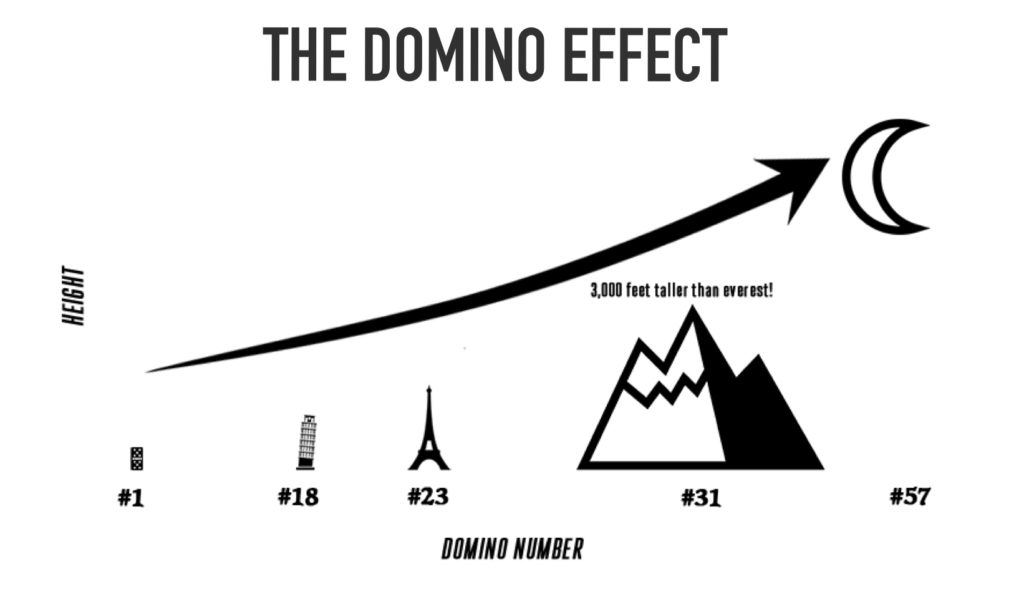 In 1983, University of British Columbia physicist Lorne Whitehead proved a rather startling fact: if you start with a tiny domino just five millimeters tall, you can knock over a domino the size of the Empire State Building in just twenty-eight moves. To prove his theory, Whitehead used a simple formula called geometric sequencing. Since 1983, his stunning experiment has been demonstrated time and time again to prove the skeptics wrong and enchant classrooms full of wide-eyed children.

The simplified explanation for how it works is that a falling domino - capitalizing on an increase of mass due to its inertia from falling - can topple another domino 1.5 times its own size ???ad infinitum! Make a long enough trail of dominoes and you can create all sorts of havoc. Want to know how many dominoes it takes to push an aircraft carrier out to sea or knock the earth off of its axis? You can find out using geometric sequencing.

As fascinating as the above science is, we see evidence of small, insignificant beginnings having major impacts all around us. Take, for instance, the following examples:

-Club promoter Scott Harrison took a vacation to Uruguay in the mid-2000s. After seeing the effects of poverty firsthand, he came back to the U.S. in 2006 and organized a single fundraising event. Since then, his organization, charity:water, has raised more than $300 million and funded more than 51,000 clean water projects across twenty-eight impoverished nations.

-Shanghai, China, which was once a small fishing village and is now a worldwide business hub, had a population less than 6 million in 1980. Today the population is greater than 27 million and is expected to top 50 million by 2050. 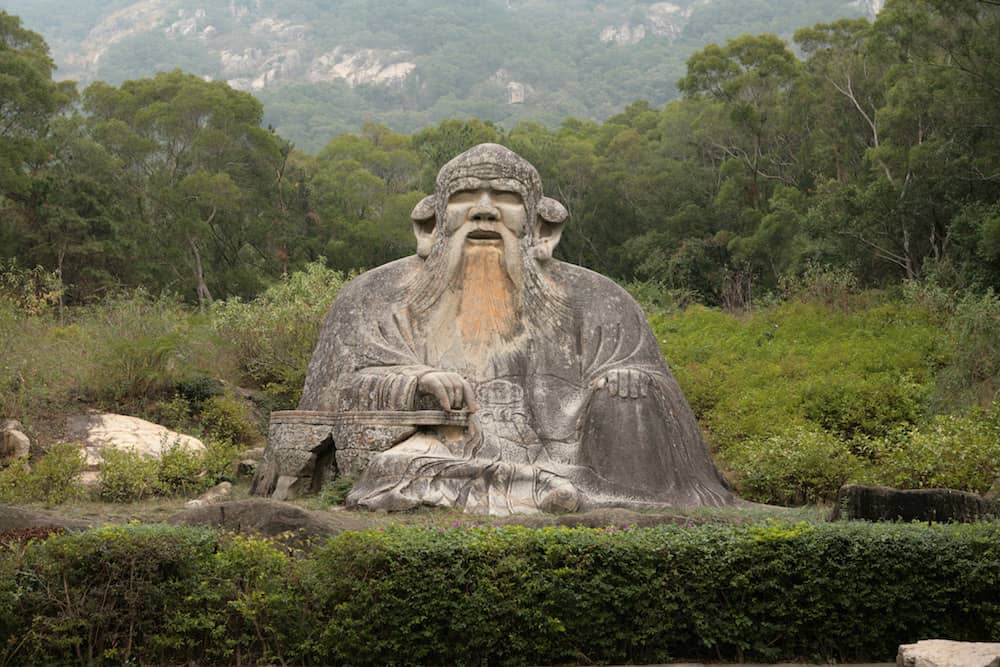 Needless to say, big things come from small starts. Or, as ancient scholar Lao Tzu once wrote, ???The journey of a thousand miles begins with one step.???

First steps can be scary. New people, places, and things can be intimidating, but they don???t have to be. At NeighborLink, one of our roles is plugging people into the right projects. Having worked with so many volunteers, we feel your doubt, understand it, and have navigated the bumps of first-time volunteerism many times. Questions we typically hear from new neighbors on the fence about volunteering are:

???What kind of commitment is involved????

The good news is that we don???t operate on a One Size Fits All approach at NeighborLink. Want to lend support to an experienced group of volunteers? Prefer to serve one-on-one? Rather jump into a two hour time slot on a specific Saturday morning? Or perhaps you???d rather join a socially-active group that meets once a week after breakfast. Either way, there???s plenty of room for all of these options and so many more. The only requirement is to take the first step: clicking VOLUNTEER or by just giving us a call.

???But,??? you may be thinking, ???I only have time for one seemingly insignificant project. Is it really worth the hassle in the grand scheme of things????

What is smidging? Surely, you???ve heard the word before: 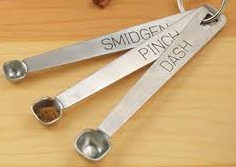 In cooking terminology, a smidgen officially measures in at 1/32 of a teaspoon. In other words, an amount so small that you might not even notice it. However, when you add a smidgen here and a smidgen there, you???re left with a substantial sum at the end of it all. I???m reminded of this every time I get my hair cut. For although I consider myself bald, there???s always a surprising hill of hair left behind on the floor when I stand up (why does it only grow on the back and sides?).

Or take, for instance, the savings app Acorns. Let???s say you spend $10.97 at the grocery store. Acorns allows you to round each purchase up to the nearest dollar, thus sending a smidge - in this case, $0.03 - to a savings account. Multiply each smidgen saved over the course of a week, month, or year, and your ???insignificant??? spare change can quietly turn into a vacation, new guitar, Christmas presents for the kids, or hair treatment for the underprivileged like myself. Still skeptical? Since 2014, Acorns users have saved more than $1 billion- all by capitalizing on the easy-to-incorporate Concept of Smidging.

So how does smidging apply to NeighborLink, a non-profit that shares practical neighbor-to-neighbor expressions of God???s love? That???s easy: in much the same way as the domino effect does. It???s adding one small act of kindness at a time to your daily routine (paying it forward in the drive thru can seriously set the tone for a customer's day); volunteering when your schedule allows (with NeighborLink or a similar organization that allows participation); getting your circle involved in a fundraiser or charity event (just think what $20 x 20 friends could do for your community); or simply shoveling a few extra feet of snow for an unsuspecting neighbor.

Over time, do you think those deeds will go unnoticed or unreturned? Instead, they???ll build one upon the other in a cascade of kindness, making your community a better place to live by toppling one injustice after another. Think of it as a sort of compound interest added to your community and neighborhood, all deposited by loving neighbors like yourself.

One domino at a time. One smidge on top of the other.

Who wouldn???t want to live in a neighborhood like that?