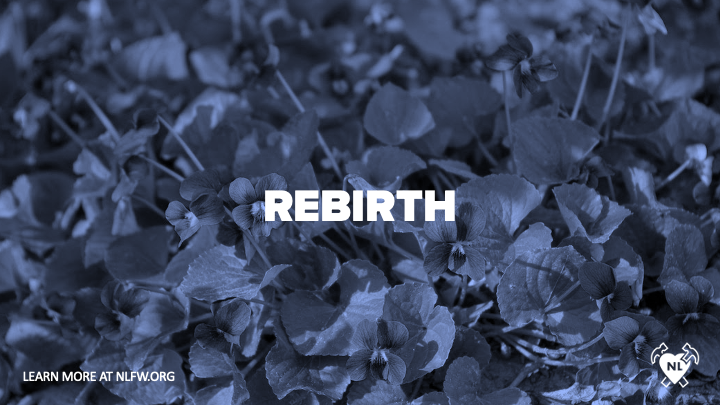 Yesterday, after arriving home from a brief errand, I parked my car out front and was immediately greeted by a startling sight: there was a woman I had never met before sitting cross-legged in our lawn. While the two of us had never met before, I did happen to recognize her. She was our next-door neighbor, who I had only seen in passing a time or two. “I’m sorry!” she exclaimed as soon as I stepped from the street to the walkway leading up to my porch. “I’ve encroached on your lawn!” 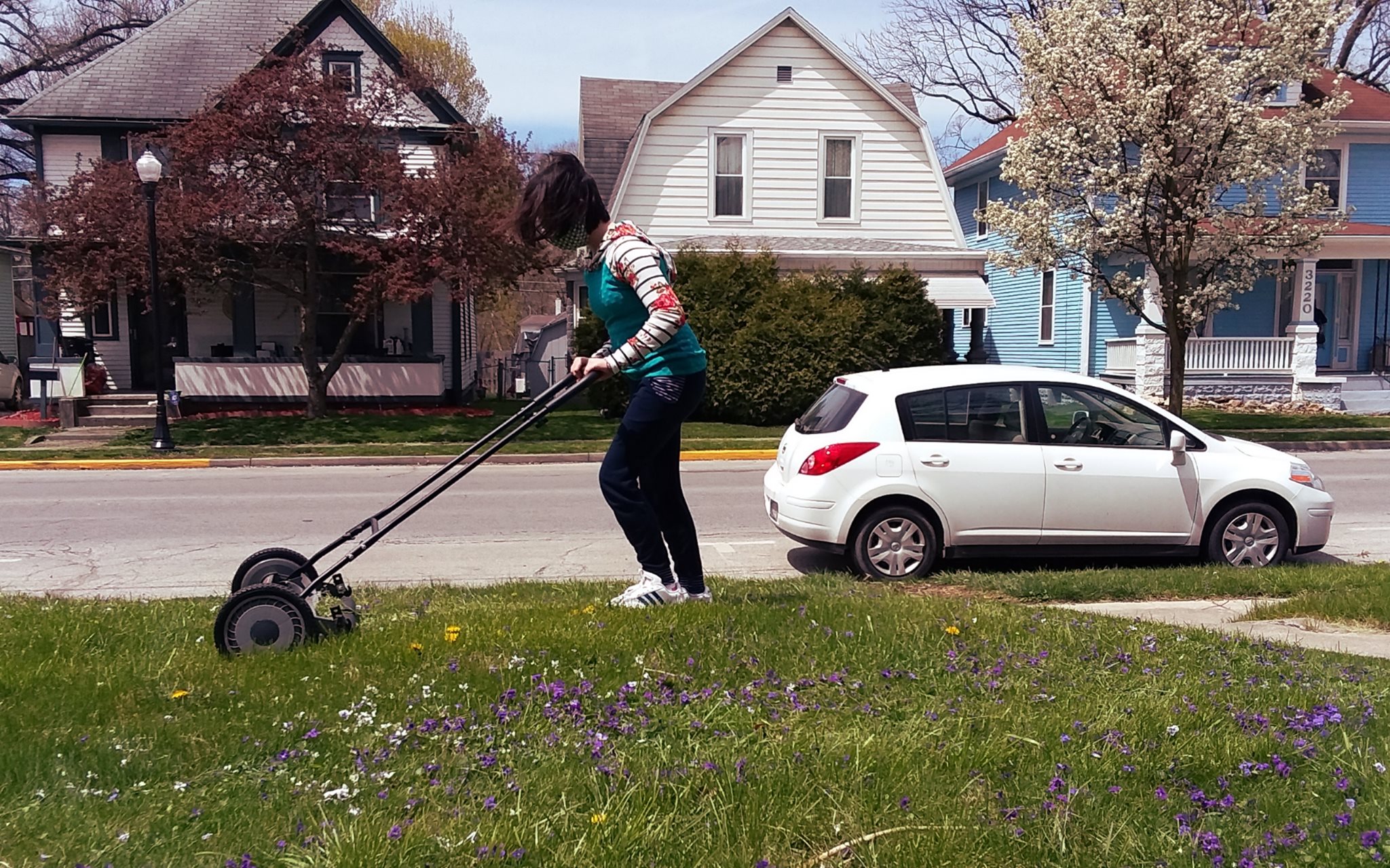 In truth, I was grateful for the unexpected encroachment, as it was the perfect opportunity to meet my unknown neighbor at long last. “Don’t worry about it,” I answered, waving aside her concern with my one free hand. I stopped in front of her, a good eight feet or so between the two of us, watching as she placed a handful of small, purple flowers into a plastic bowl by her side. “They’re beautiful, aren’t they? I love how they cover the grass with so much color.”

“They are! But they’re at the end of their lives, so I was hoping to collect as many as possible before they disappear in a few days. I’m creating something new with them. A second life, of sorts.”

I briefly scanned my lawn. Plenty of the small, purple flowers still remained. I was kind of disappointed, because she was the second person in a week to tell me they would vanish pretty soon. “You can take as many as you’d like. And don’t worry about coming onto our lawn, we don’t mind at all. By the way, I’m Robert.”

She told me her name and her husband’s name, and we spoke as neighbors for the very first time. I told her that we had just moved in a month and a half ago, and it was good to finally meet her. Within moments, we stumbled upon a common connection both of our households shared: we all love working with herbs and garden plants. A few minutes later, we said goodbye.

I stepped inside, lifting a box of donuts in the air for my wife and daughter to see. While many shops in the area have been closed these last few weeks, the donut store around the corner has not been one of them (I’m not sure if that has been a good or a bad thing for my family). My wife and kids made a beeline for the box and I glanced outside the window at the woman still working in our yard. In forty-one years, I couldn’t remember a scenario like this ever playing out before. I liked it.

“Who were you talking to?” my daughter asked, claiming the first of six donuts in the box.

“Our neighbor. She’s picking our purple flowers to use in a recipe. She’s an herbalist.”

We talked about how cool that was between hurried bites of our chocolate- and maple-glazed afternoon snacks. Suddenly, I realized how simple but brilliant a potential gift-giving exchange could be for these new neighbors of ours. All we’d have to do is buy them pots of lavender, basil, or any other herb and need not worry about the threat of an embarrassing regifting.

I finished my donut, watching as my neighbor joyfully completed her task. With the bowl of vibrant, purple flowers propped beneath her arm, she stood to her feet and returned to her own lawn. It may have taken a month and a half, but I rejoiced- I could finally place a name to a face. I’m sure she was thinking similar thoughts, along with how she could finally enjoy a few minutes of normalcy after a month and a half stuck indoors.

A month and a half.

Much has changed in life over the last month and a half. I’m sure you feel it, too. For starters, how strange is it that it took me nearly two months to meet a person living in the house right next to ours? But now that life is getting back to normal - at least for those of us in the midwest - it got me thinking about this time we’ve lived through and the word we’ve become all-too-familiar with over the last few weeks:

I recently learned where the word originated from and realized how much value we can glean from it as we choose to move forward with life. 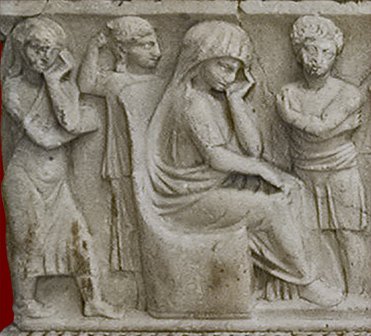 You may not know it, but quarantine is the Latin word for forty. Back in ancient Rome, when a woman’s husband passed away, she would seclude herself inside of her house for forty days of mourning. Afterwards, she would then be expected to move on in life. This usually meant remarrying or becoming a widow, if she were wealthy enough. In later times, the word would be applied to the sailing world. When a ship pulled into port carrying disease, it would be set apart and closely monitored for the safety of those who lived on shore. All of the crew and passengers would be secluded for forty days - or quarantined - to ensure the disease would not spread needlessly to land.

Likewise, the number forty held vast significance in the ancient world. Forty - or quarantine, as the Romans would say - represented the end of an epoch and the beginning of a new, improved era; an impossible-to-miss marker pointing to a specific ending which lead to a revitalized beginning. Take, for instance, the 157 times the number forty is used in the Bible and the events surrounding each one of them (the Flood, the Exodus, Jesus’ temptation in the wilderness, etc.). Yes, the number forty was always a big deal in ancient times.

Today, we stand at the end of an epoch and at the beginning of a brand new era. A crossroads, if you will. Standing here together, I believe we can all see the significance of the era we’ve just lived through. Will we allow its memory to fade away or will we carry it on into the future? The danger we all face is in forgetting the struggle, abandoning the lessons, and resuming life as it was before. But why go back to what was when this quarantine we’ve all lived through is an impossible-to-miss marker pointing us toward a brand-new era and direction?

I looked out of my window one last time to study the lawn. It was now bereft of all color but green. My neighbor, now indoors, was concocting a brand new life and future for those tiny, yet glorious purple flowers. Can you believe each one was destined to fade away and become a distant memory mere minutes ago? But with love and intentional thought, my neighbor’s effort has made all the difference in the world for those wild, purple violets. She has given them new life.

May it be the same with all of us as we move forward.