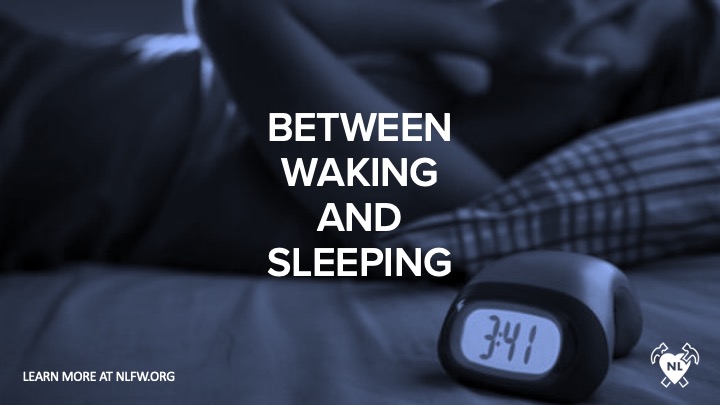 I hadn’t been sleeping well recently. For many nights I a row, I lay awake at night tossing and turning for what seemed like hours. It persisted each night until the 5:30am alarm went off and inevitably I was still awake. If you’re a human above the age of - oh, I don’t know- a few minutes old, you're probably familiar with the dreadful real-life monster that is insomnia. For some of us, such restlessness can be attributed to school-related anxiety. For others, hunger is to blame. Perhaps yours is caused by work or a strained relationship. For many years the bane of my nighttime existence was a toddler who would wake up every…single…night; and not just once, but two or even three times per night. Whatever the root, a night of unwelcome sleeplessness is never fun at all.

In the middle of my bedroom is a window with an air conditioner. Much to my chagrin, the hastily-installed unit has an inadequate tilt to it. The creators of the unit must have experienced this problem firsthand because they went out of their way to address the issue in the user manual. They did not address the issue once or even twice, but multiple times in the very same manual. Little did they know that I would be the one installing the cumbersome unit all by myself while dangling halfway out of a two-story window one scorching afternoon, so adequate tilt was not exactly a priority in the heat of the moment (pun intended?). Therefore, my only goal was to get the awkward install over and done with so the room would no longer be an uninhabitable furnace, but an igloo fit for penguins.

Fast forward a couple of months and I’m happy to inform you that the room is no longer suitable for a Shadrach, Meshach, and Abednego reunion tour. Sadly, though, we swapped the fiery furnace for what seems to be a lively aquarium or, better yet, a wall-mounted monument to the whale that swallowed the prophet Jonah. For as soon as I laid my head down to sleep at night, an incessant bubbling sound reminiscent of an orca’s active blowhole decided to make its nightly appearance, all caused by the collection of condensation in the bottom of the air conditioning unit. You see, the reason you need a tilt on the thing is so the condensation drips out of the backside without forming any puddles within the unit itself. Otherwise, when the blowing air collides with the condensation puddles, you get a horribly annoying sound that would give the prophet Jonah nightmares for weeks on end.

There’s a reason people keep aquariums in their living rooms and NOT in their bedrooms. For hours I would toss and turn as dreams of sunbathing turtles and vacationing rainbow fish filled my head, wondering if it would be easier to just get out of bed and tilt the noisy thing or use a vacuum cleaner to suction the water out at 3:30 in the morning. Meanwhile, my sleep-deprived mind was filled with songs from the musical Hamilton (a recent pastime enjoyed by my daughter and I) and images from Be A Good Neighbor Week. All sorts of projects were there: garage painting, wheelchair ramps, yard work, roofing projects… eventually, a family of four would enter a dream, all joyfully painting a fire hydrant. Their entrance was always impeccably timed to a refrain of “raise a glass to the four of us; tomorrow there’ll be more of us,” while accompanied in time to the bubbling from Nemo’s aquarium. 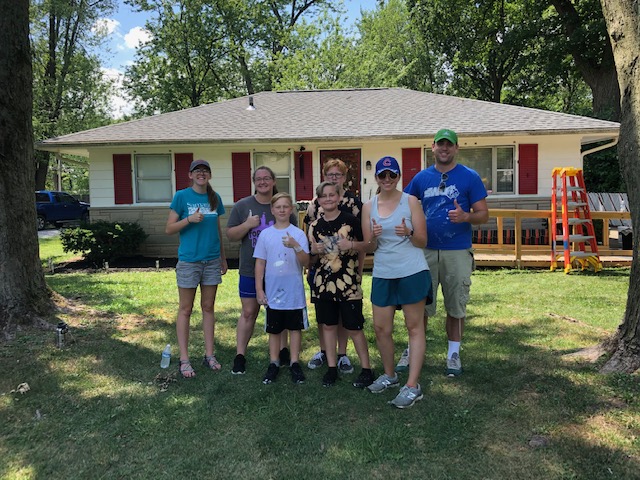 Truth be told, Be A Good Neighbor Week had such a profound effect on me that it really did keep me up for nights on end. Although I didn’t have much of an opportunity to dig in and volunteer that week, I did spend each day running around from project site to project site in a hurried attempt to collect images and stories of volunteers and recipients in the middle of it all (you can view daily recaps on our YouTube channel here). Never in my forty-one years on earth did I imagine I’d be gifted with such an honor. Truly, it was a storyteller’s dream come true.

However, every good story seems to have a villain. Without one, where is the struggle? The villain, in this case, was the conflicting noise trying very hard to disrupt all positivity and hope in my sleep-deprived head. Maybe you felt it too that week: the constant anger and hatred on full display on social media; the countless friendships destroyed over face mask regulations; the chaos of differing political views in this heated election year. I tried my best to avoid the noise but part of my job is handling all social media accounts for NeighborLink, so avoidance was futile. 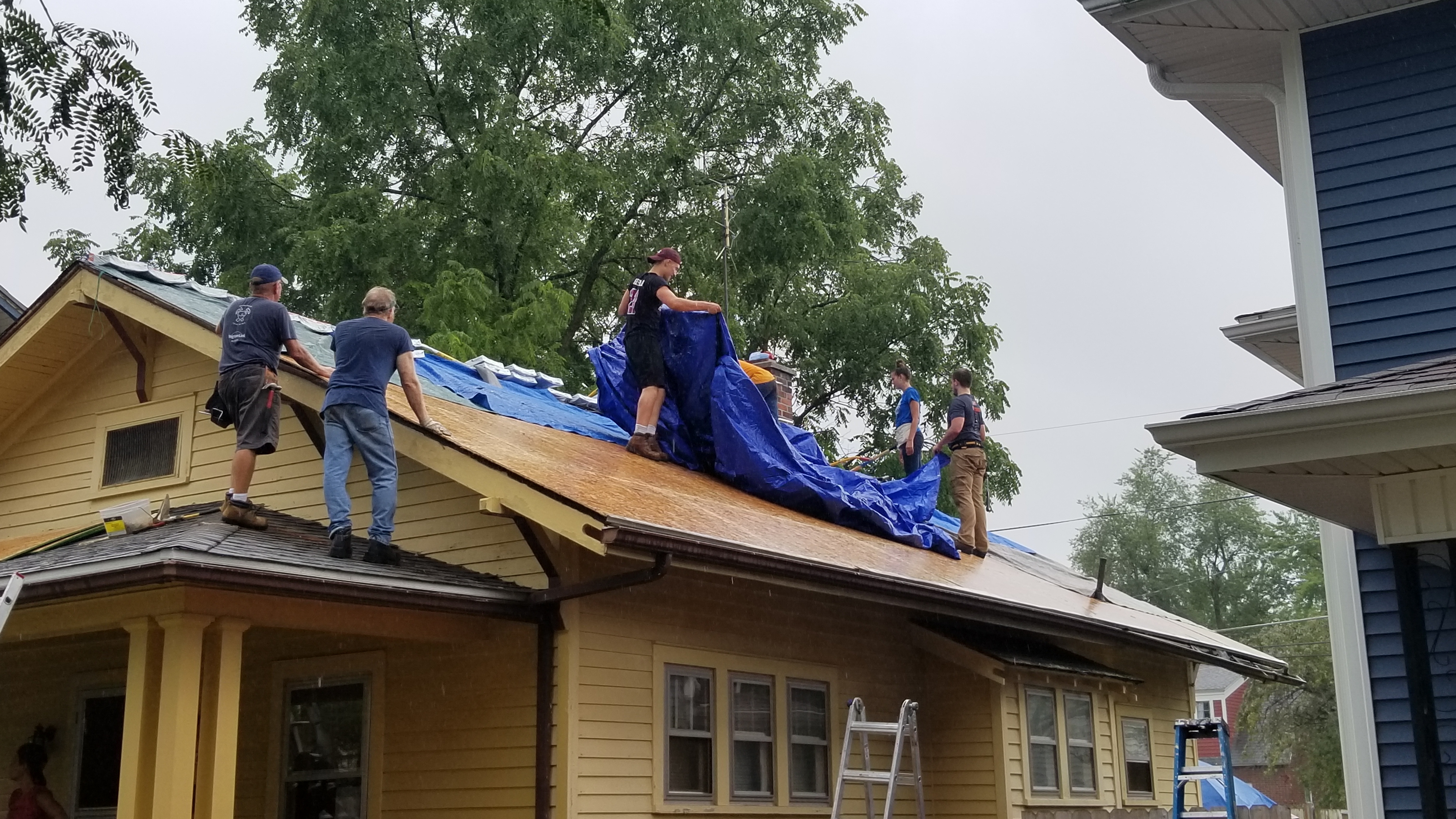 The stark contrast could be perfectly described with the title of a well-known Charles Dickens novel: A Tale of Two Cities. For on the one hand we had selfless concern for neighbors, all brilliantly portrayed in Be A Good Neighbor Week. The other side was quite the opposite: it was the dark side of the digital realm, those dangerous alleyways inhabited by Facebook, Twitter, and company. In my sleeplessness, I lay awake each night grieving that both must exist within the very same cities, townships, neighborhoods, streets, and sometimes even houses. Why did life have to be like this?

Laying awake, I wished that I could invite each person in the middle of an argument to a roofing project, or a fire hydrant painting, or a wheelchair ramp install… but then, as I rolled from side to side in a vain attempt to find that perfect position to lull me back to sleep, I realized that I very well could do just that. I can invite everyone to come along for the ride. I can invite them to view what it’s like to volunteer at NeighborLink. I can remind people of the most important ideals in life. And if all of those fail, I can simply choose to be an example by word, deed, action, and response.

I woke up last Thursday morning feeling something that I hadn't felt in quite a while: I had soundlessly slept through the entire night. The same was true on Friday and Saturday. Although I’m sure it had something to do with the disappearance of the mysterious bubbling sound, I’d also like to think it had something to do with the peace I’d found in choosing to do my part in making my city, township, neighborhood, street, and house a little better with each new day that's granted to me. It will take real, hard work but it certainly makes falling asleep to the tune of a Hamilton song much, much easier to cope with.