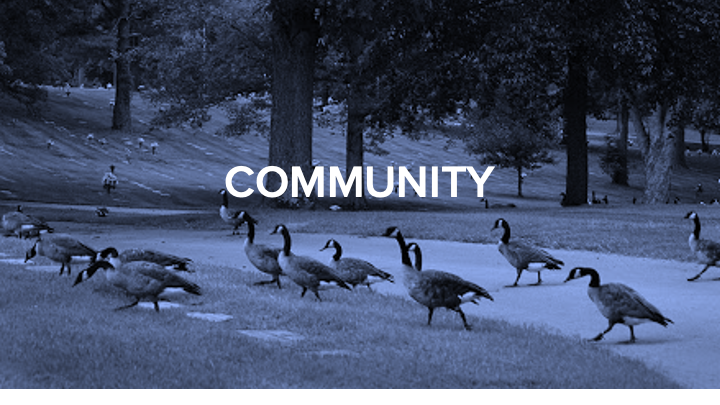 The morning was perfect. Mid-60s, or so, with a light, gentle breeze that left no tree untouched. Branches swayed; wind whipped through the windows of my car, almost stealing my hat and carrying it far away. I’m a big fan of mornings, and mornings such as these are my favorite sorts.

I came to a stop at the intersection of Creighton and Lafayette. Within moments, a nearby quacking noise filled my ears. It came from somewhere beyond the open passenger-side window I’d left open. I looked around, craning my neck ever-so-slightly. Soon enough, the culprit came in view: a little ways up in the grass, laying in the shadow of a towering group of trees, were a handful of geese. I have to admit, it was a somewhat amusing sight. There they were, just hanging out in the shade without a single care in the world. There were about ten of them lazing about, almost as if the entire family had gotten together in the final days of summer to enjoy their last day together before school started up again.

I was entranced. The light was still red, so silently I watched and waited. An instant before the light turned green, I had an epiphany. The ten or so geese were living out and experiencing a concept that is familiar to all of us, at least in name:

Isn’t it funny how — if you dare to slow down for just a moment or two — you can find things out in nature that teach invaluable lessons? That was exactly how I felt as I sat in my car watching the geese. At its core, it may have appeared like a random glimpse of animals being animals in the wild, but their behavior also painted a vibrant picture of that basic, yet equally complex word we call community.

I wasn’t ready when the light turned green but the person behind me clearly was. They gently tapped their horn; not in anger, but in that “Hey, buddy, wake up,” sort of way. Even still, I preferred the honking of the geese to the honking of the early morning car horn.

I hit the gas and continued on my way. My destination was a moving site for a family of four. I had never met the family but knew their names from church, so I jumped on the opportunity to volunteer when I heard about it. For the first part of the day we moved a lot of their boxes to a storage unit. In the evening, we moved the big stuff to their new house up in Auburn. It was exhausting work, but — as most volunteers will tell you — the joy received from helping a neighbor in need far outweighs the muscle pain you’ll surely feel the very next morning.

We called it a day around 8:30pm. The new house was cluttered and still a mess, but all of us were starving. Someone made a quick run for pizza and all of us gathered around the antique table we had transported up from Fort Wayne. Plates were passed around. I grabbed a cold water. I took my first bite, absolutely certain that I had never tasted such delicious pizza in all my days on earth.

Laughter filled their brand-new house. Jokes were told around the table. We shared stories from the day’s long move, including a couple of near mishaps that almost threatened to derail the whole thing. Standing near the kitchen sink, I observed it all with such joy and inner peace. It suddenly struck me: how amazing was it that I didn’t even know a single soul who filled that room nine hours before? Yet there we all were, laughing together, smiling together, recollecting together, and making memories together.

Instantly, I was transported back to the intersection of Creighton and Lafayette; of the geese that unknowingly painted a picture of what life is really all about:

I finished that first delicious slice, had another, and then another still. I was tired and ready for a shower but somehow hesitant to leave. I would be the only one heading back to Fort Wayne that night, therefore the only one missing out on all the memories yet to come. Still, I said goodnight and that I would see them all tomorrow morning for the last part of the move.

I headed out. The first segment of my journey led me straight into the sunset. It was a beautiful sunset that night; a breathtaking fire on the horizon, with orange, red, and purple hues all spread across the sky. And suddenly, just before I turned south on I-69, I saw a flock of birds — I’d like to think that they were geese — all coming in for a landing. I imagined them gathering around their favorite tree, noisily chattering about the day’s long flight, and finally tucking in for the night. I smiled and drove the rest of the way in silence, my thoughts all turned to life and what it’s really all about: