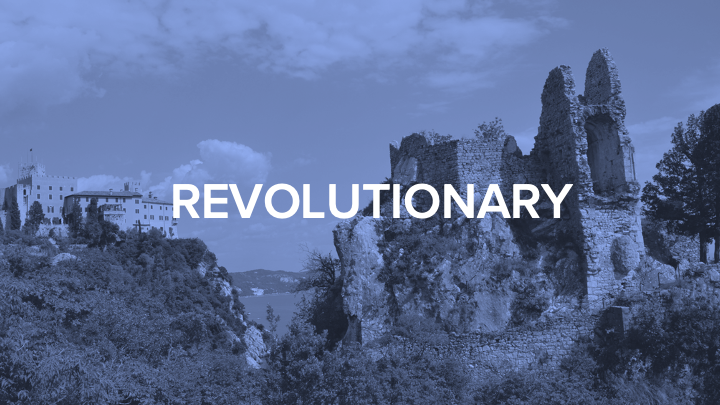 “The most revolutionary thing you can do is get to know your neighbors.”

I’ve come to grips with a fundamental truth:

Our comfort zones are not as safe or beneficial as we’d like to imagine. While there is supreme value to be found in close-knit communities and friendships with deep roots, I have come to see how detrimental to self and society comfort zone living can actually be.

On the way to my children’s school is a sight that leaves me perplexed and saddened each time we pass it by. Without going into detail, it’s safe to say that an all-out political and cultural clash has been raging between two next door neighbors for quite some time. Both, from what I can tell, are as far from each other on the political spectrum as they could possibly be. Both wear their ideologies on their sleeves (or in this case, their front porches). Over the last few weeks, I’ve watched as exterior decorations on both houses have progressively become more elaborate, with most banners, flags, and placards facing not toward the street but the opposing house. From the outside looking in, it’s like both are in a contest to one-up the other and prove how loyal they are toward the causes which speak loudest to their hearts.

Each time I pass that war-zone, I wonder about the narrow patch of grass that serves as a median between both houses. Has it ever become a demilitarized zone, if only for a moment? Has it ever played host to a friendly conversation or barbecue? Somehow, I doubt it. Instead, I envision both houses as heavily-defended fortresses with names like Comfort Zone 1 and Comfort Zone 2. High upon their ramparts, no flags of truce are ever flown. Proudly hanging from their walls are torn and tattered flags; each rip, burn, and bullet-hole serves as a reminder of a war they have been fighting to no end. Each day I pass those houses, I wonder what would happen if those comfort zones were breached with a revolutionary act of love or kindness.

On the other side of town, across from my own house, lives a multi-generational family. There is a child, a mother, and a grandmother. All throughout the day, the grandmother can be seen outside on the porch; it’s there that she enjoys the peace and quiet of retirement. She’s never quite sure what the day will bring, but that doesn’t usually phase her. She’s always up for a smile, a wave, or a “Hello!” sent across the street to us and other neighbors. In fact, she is outside so often that she was the very first person to welcome us to the neighborhood when we moved in last March. Over the past few months, we have enjoyed the neighborly relationship that has formed between our two families with time, effort, and patience.

As far as we can tell, we don't really share too many similarities with the family across the street; but that is no excuse to cloister ourselves behind the walls of our own fortress, no matter how comfortable such neighboring would appear. Occasionally, we’ll cross the street to talk or to exchange food or other things. Back in June, my wife prepared a meal with them in mind. It was their first experience with Filipino food. Serving them brought as much joy to us as eating it did for them, I’d like to believe. There have been other times since then when food or snacks were given or exchanged. Each time it was unplanned and somewhat spur-of-the-moment. For myself, the desire is usually triggered when I see them outside while I’m carrying something in from the car. It’s then that I realize an opportunity for revolutionary love and kindness has presented itself. For that's what love and kindness really are: revolutionary ideas that drastically shift and change the landscapes where they land.

Last week, I ran home to bring my wife a drink from Starbucks. Right next to her drink, in the car cupholder, was my own untouched cup of coffee. As soon as I saw the retired matriarch of the house across the street sitting there on her porch, I knew a moment for revolutionary kindness had just presented itself. Carefully, I crossed the street, gave her the extra cup of coffee, and struck up a conversation that lasted a good five minutes or so. Toward the end of the conversation, I felt the walls of my comfort zone collapse and retreat, for the cry of “Revolution!” had suddenly reared its head. Denying it would do no good at all.

The words that came from my heart were honest, yet ones I never would have dared to utter a few months ago: “I just wanted you to know how much you mean to my family," I said while looking her straight in the eyes. "You were the first person to welcome us to the neighborhood and that has always meant something special to us.”

The look on her face was an absolute treasure. As soon as I saw it, I wondered why I had spent so many years building such enormous walls around my own comfort zone. “Thank you so much!” she joyfully replied. Her eyes sparkled; I understood the delight that hung from each word because I felt it, too. “You can come by and talk any time. I’m always here!”

Instantly, my thoughts were transported to the dueling houses near my kids’ school. I wondered what the landscape would look like if a moment such as this had ever taken place; if a truly revolutionary step of love or kindness had ever taken place before their battle lines had been drawn. What if a meal had been shared or a coffee given with no strings attached? I doubt it would take long for those walls, as high as they have been built throughout the years, to come crashing down in a thick cloud of dust. Still, I know how hard it is to take that first vulnerable step. I've done it and it was not easy. By instinct, we tell ourselves to hold fast; that the first to crumble and give in is also the weakest and the loser. Therefore, we hold out for as long as possible, digging trenches, raising towers, and defending our comfort zones for fear of losing ground to the enemy who is so unlike ourselves (but are they, really?). In time, the battle lines we form become so prominent that even outsiders see the marks they've left behind.

But revolutionary love and kindness also leave their marks. They've left their marks on nations, religions, cities, and people, too. They've left marks on me. I'm sure they've left marks on you. I can't help but believe these revolutionary ideas and actions called love and kindness can help shape, mold, and shift neighborhoods into communities we'd all rather live in. You know, ones without the need for so many comfort zones disguised as castles.